Sculptures with Nature
Moore believed sculpture should be displayed out of doors.
“Sculpture is an art of the open air,” he said.
The Hakone Open-Air Museum Green Plaza garden offers an ideal setting to immerse yourself in the museum’s collection of 10 of Moore’s sculptures.
The solid presence of the sculptures and the open-air setting create a contrast that is captivating at any time of year. 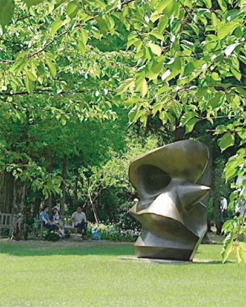 Henry Moore has left behind a variety of quotes to help us appreciate his art.

Theme: Mother and Child
"The ‘mother and child’ idea is one of my two or three obsessions, one of my inexhaustible subjects.
This may have something to do with the fact that the ‘Madonna and Child’ was so important in the art of the past and that one loves the old masters and has learned so much from them...
But the subject itself is eternal and unending, with so many sculptural possibilities in it—a small form in relation to a big form protecting the small one, and so on. It is such a rich subject, both humanly and compositionally, that I will always go on using it."
Henry Moore Drawings 1969-79, Wildenstein, New York 1979 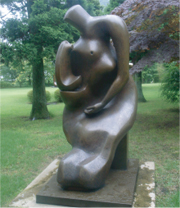 Theme: Reclining Figures
“There are three fundamental poses of the human figure. One is standing, the other is seated, and the third is lying down.
But of the three poses, the reclining figure gives the most freedom, compositionally and spatially.
The seated figure has to have something to sit on. You can’t free it from its pedestal.
A reclining figure can recline on any surface. It is free and stable at the same time."
Henry Moore Drawings 1969-79, Wildenstein, New York 1979

Theme: Internal/External Form
“Now armour is an outside shell like the shell of a snail which is there to protect the more vulnerable forms inside, as it is in human armour which is hard and put on to protect the soft body. This has led sometimes to the idea of the Mother and Child where the outer form, the mother, is protecting the inner form, the child, like a mother does protect her child.”
Henry Moore Drawings 1969-79, Wildenstein, New York 1979 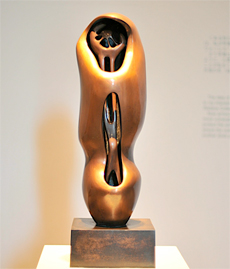 Henry Moore rarely sculpted male figures.
Moore’s daughter Mary was born at the time the artist was working on the idea for this piece. As such, it reflects Moore’s experience of becoming a father.
The arms of the parents trace a flowing curve to encompass the child, evoking the emotions of human love in familial ties and the veneration of tiny life. 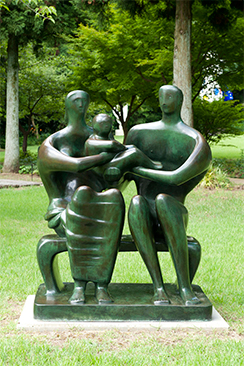